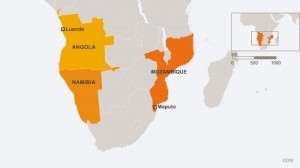 The debris of a Mozambique Airlines plane crash missing from Friday has been found on Saturday (today) but all of the 33 passengers including the pilots and crews aboard it could not survive the crash, said the Mozambican Police. There were 27 passengers and 6 crew aboard the plane when it crashed at a game park in Namibia, near a bordering area of Angola and Botswana.

The TM 470 flight left Maputo, the capital of Mozambique for Angola on Friday at around 0930 GMT and was scheduled to arrive Luanda, the capital city of Angola at 1210 GMT. But the flight went missing after it faced severe weather which forced the aircraft to cut off all communications with the control tower. The last contact it could make was over northern Namibia.

The burnt-into-ashes aircraft was found by the rescue workers in the dense bush of Bwabwata National Park in Namibia, near the borders with Angola and Botswana, said Namibian Police Force Deputy Commissioner Willy Bampton. He also added that no survivors were found at the site of crash.

Investigators located the black box, with the voice recorder of the aircraft and took for further investigations. Authorities said that, the aircrash could be due to the bad weather and poor visibility when the place went missing.

There was 10 Mozambican, 9 Angolan, 5 Portugese and one citizen each from Brazil, China and France on board, the authorities added.

The Bwabwata National Park is in Namibia’s Kavango East region and is a sparingly-populated area of thick forests.