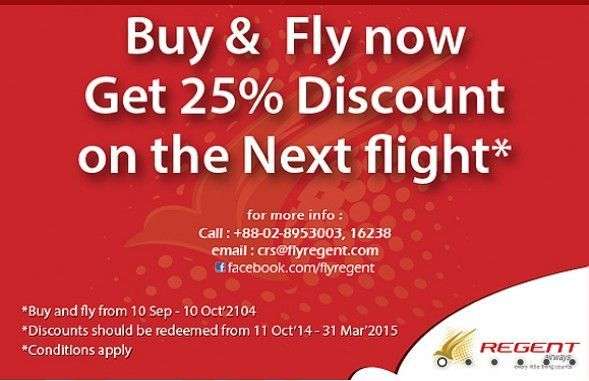 In an announcement, Regent Airways offered an attractive 25 percent discount on tickets for all its destinations. The offer entitled Buy and Fly Now, Get 25% Discount on the Next Flight is the latest offer by the airline.

To avail this offer, interested passengers will have to buy tickets from 10th September, 2014 to 10th October, 2014 for any of the routes Regent Airways operates flights. Upon each buy, every passenger will get a 25 percent discount on the next flight he or she avails.

Earlier, Regent Airways announced a mega 50% discount for all its domestic and international flights to mark its 3rd anniversary of successful operation on 9th November, 2013 which proved to be a grand success for the privately owned Bangladeshi airliner. Passengers all over the world expressed their interest for that discounted offer.

Regent Airways is expecting a very impressive response from its valued passengers for the latest offer too.

Interested passengers can call the airline at +88 02 8953003, 16238 or email to crs@flyregent.com for further information on this flight. You can also visit there facebook page at www.facebook.com/flyregent.