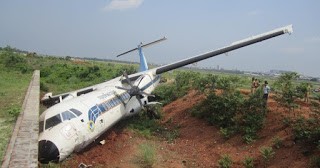 A Royal Thai Air Force aircraft crashed at Hazrat Shahjalal International Airport today at around 0845 hrs. The small Air Force ATR 72 type aircraft (Flight SL 60314) landed safely but at the last moment skidded off the runway losing control over it leaving the aircraft heavily damaged. The flight left Bangkok for Dhaka with 15 crews on board including three pilots. Three pilots were injured while two of them were taken to the hospital and another one was given first aid. Rest of the 15 on-board was unhurt and taken to safe place after the aircraft crash.

It was learned primarily that technical fault was the reason of the crash. Just after the incident, airport fire service arrived at the location of the crash and took position. Civil Aviation officials, Airport Armed Police members and other officials rushed to the spot and secured the area. But no other casualties were reported.

Authorities are investigating the actual cause of the crash. Later on Civil Aviation and Tourism Minister Faruk Khan visited the spot.